Giving Voice Society is here to present you with excellent performances of beautiful music. Tickets sell fast at this venue. Make sure you get yours!

Patricia will be performing at the Royal Opera House, Mumbai in the first week of December with the Neemrana Foundation

The University of Winchester and Winchester Cathedral will celebrate the life and work of composer John Tavener on 11 November. 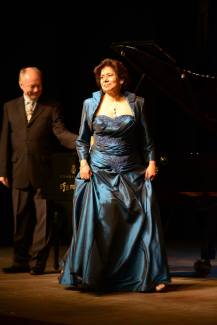 Path, CD Review (January 2011)
‘‘…Patricia Rozario and Michael McHale’s world premiere recording of John Tavener’s Epistle of Love among its exquisitely rendered highlights.’’
— – David Sheppard, Mojo
City of London Festival, Drapers’ Hall, (London June 2010)
‘‘It (the music) also requires considerable technical agility from the soprano, and Patricia Rozario didn’t disappoint. She has always had an arresting voice, with its laser-like focus and white intensity. But here (…) she also sang with impeccable intonation. In her glittering sari she looked magnificent too. It would be good to hear her more often in London.’’
— – Richard Morrison, The Times
Music in Drumcliffe with The Oriel Trio, (Ireland, May 2010)‘

‘The best of the performances I heard was by Rozario and the Oriel Trio of John Tavener’s Yeats-settings, To a child dancing in the wind, plain but plaintive music in which, in Rozario’s telling delivery, small touches yielded big effects.”

Record Review
‘‘Rozario is in her element, finely phrased and delicately nuanced, and Ogden responds with unforced vitality.’’
— Robert Maycock, BBC Music Magazine
Gorecki, Good Night, Knaifel, O Heavenly King etc., Louth Sounds LCMS901 (May 2009)
‘‘The performances are of a consistently high standard, and a special mention should be made of the ensemble’s guest star, the soprano Patricia Rozario, although her two short appearances are all too brief’’
— Gavin Dixon, musicweb-international.com
‘‘exquisite singing of ethereal quality by soprano Patricia Rozario.’’
— The Sunday Business Post
‘‘…soprano Patricia Rozario is at her golden-hued best in Knaifel’s O Heavenly King’’
– Classic fM – September 2009
Drogheda Arts Festival (May 2009)

‘‘Soprano Patricia Rozario (…) gave a hauntingly beautiful performance of one of Knaifel’s best-known pieces, O Heavenly King.’’
— – — Irish Times
Shobana Jeyasingh Dance Company, Faultline, Lawrence Batley Theatre, Huddersfield (November 2008)
‘‘Soprano Patricia Rozario’s incredibly flexible and powerful soprano … ‘‘
— Huddersfield Daily Examiner
Howard Blake 70th Birthday Concert, The Passion of Mary, Cadogan Hall (October 2008)
‘‘Patricia Rozario glowed in the part (of Mary), mystical and full of wonder at the events unfolding in her life, keeping control of her voice and never losing sight of the fact that this music is truly beautiful.’’
— musicweb-international.com
Temenos 08, Co. Louth (October 2008)
‘‘Soprano Patricia Rozario took rather a more proactive role in the 1983 To a Child Dancing in the Wind with the Oriel Trio (flute, harp and viola). (…) the text was unavailable, though this was considerably compensated for in Rozario’s extraordinarily vivid expression.’’
— Irish Times
Tavener, Cantus Arcticus (UK première), BBC Proms (August 2008)
‘‘Patricia Rozario’s fearless soprano…’’
— – The Guardian
West Cork Chamber Music Festival (July 2008)
‘‘the highlight of the closing concert was Austrian composer Thomas Larcher’s My Illness is the Medicine I Need for soprano (Patricia Rozario) and piano trio. The text, of statements from patients in psychiatric hospitals, is taken from an issue of Benetton’s magazine, Colors. Larcher set them – and they were here delivered – with heart-rending acuity.”
— Irish Times

City of London Festival, Drapers Hall, with Julius Drake (July 2008)
‘‘Rozario’s performance was intensely musical, and the higher she went, the more beautiful she sounded (…) Tavener’s music, delivered through Rozario’s subtle, suggestive art, shadowed the poetry’s every movement.’’
— – The Independent
‘‘The music had a quiet sumptuousness, the vocal lines beautifully drawn out, the accompaniment sweetly harmonious’’
— – The Times
Celebrating English Song, Tardebigge (July 2008)
‘‘Soprano Patricia Rozario and pianist Mark Bebbington, the collaboration rewarding, natural and easy, responded to these sensitive miniatures with an intelligence and empathy which informed their performances throughout (…) Pleasantly creamy, Rozario’s phrasing allowed her clarity of diction to point key words’’
— – Birmingham Post
Elena Firsova, Tristia / Vor den Sturm, Vienna Konzerthaus (May 2008)
‘‘Patricia Rozario undertook the challenge of the almost impossibly imposing — – both in tessitura and harmonically — – soprano solo with a superior fullness of tone and unwavering confidence.’’
— – Echo
Tavener, To a Child Dancing in the Wind etc., RCA 88697217612 (June 2008)
‘‘Patricia Rozario floats effortlessly with a voice of liquid gold’’
— – Gramophone
‘‘beautifully poised, unforced lyrics from the 1980s, lusciously sung by Patricia Rozario.’’
— – The Times
‘‘Patricia Rozario (…) sails effortlessly though the extreme tessiturae and wide intervals while fully alive to the expressive and dramatic possibilities afforded by the texts.’’
— – International Record Review
‘‘When you have musicians who give themselves up to the Tavener ethos as enthusiastically as Andrew Marriner and Michael Thomas it all comes to life … To a Child Dancing in the Wind is performed with just as much loving devotion by soprano Patricia
Rozario’’
— BBC Music Magazine
Wigmore Hall recital with Julius Drake (September 2007)
‘‘Rozario’s easy access to her top register helped her through Japanische Musik, and her range of vocal colours worked to the advantage of both Tavener’s and Casken’s lucid textures…Rozario had a definite success with De Falla’s Trois Melodies, bringing an easy allure to a street girl from Madrid in Seguidilla.’’
— – The Times

Huddersfield Contemporary Music Festival (November 2006)
‘‘the solo roles are given such refined expression – Patricia Rozario an expressive and eloquent vocalist’’
— The Independent
Tavener, Schuon Lieder, Black Box BBM1101 (October 2005)
‘‘Patrizia Rozario, as ever, serves Tavener’s music with conviction and understanding
— Gramophone
‘‘The songs have a pungent, explosive clarity, with Rozario as commanding in Tavener’s idiom as ever….Rozario soars
impressively ‘‘
— The Times
Cheltenham International Festival of Music (July 2004)
“(Patricia Rozario’s) performance was amazing, and her slightest gesture conveyed deep meaning. … Her rich, well rounded voice was especially suited to this drama and she gave us moments of exquisite poise in some of the high tessitura passages.”
— Cheltenham Echo
Tavener, Veil of the Temple, Lincoln Centre, New York (July 2004)
“I have nothing but praise for the vocal soloists, especially the soprano Patricia Rozario.”
— – New York Times
Tavener, Schuon Lieder, Ravinia International Festival, Chicago (July 2004)
“I found myself totally caught up in the experience, so much so that the sixty minutes fairly flew. Much of that was because of Rozario’s magnificent singing. Long an exponent of Tavener’s vocal works, Rozario, in her Ravinia debut, brought a wide range, radiant timbre, phenomenal dexterity and pitch, superb German diction and total expressive conviction to the cycle.”
— – Chicago Tribune
Tavener concert, The Temple Church, London (February 2004)
‘‘Patricia Rozario (the composer’s ubiquitous soprano), sang with passion as well as precision’’
— – The Independent
A Nitro at the Opera, Royal Opera House, Covent Garden (November 2003)
‘‘Patricia Rozario stood out, with her daintily effortless top notes.’’
— – The Times

The Veil of the Temple, The Temple Church, London (June 2003)
‘‘that wonderful Anglo-Indian soprano Patricia Rozario, veiled from head to foot like some ghostly apparition, floated her first sublime notes through the darkness of the Temple Church’’
— – The Times
Vision of Lear, Linbury Studio, Royal Opera House (February 2002)
“The cast is uniformly excellent, its only well-known member, Patricia Rozario, who plays Regan, both singing and acting with virtuoso panache.”
— – Spectator
“Patricia Rozario … possesses a voice of extraordinary refinement and accuracy.”
— – The Guardian (March 2001)
“In the BAC’s main house Patricia Rozario gave a stunning display of concentrated emotion, acting and musicianship in Stephen McNeff’s Matins for the Virgin of Guadalupe.”
— – The Times (September 2001)
“Who better to sway the emotions than the expressionistic Rozario? The variety of colour and feeling that she brought to each song was highly original.’’
— – Opera Now – “In Recital”

(July/August 2001)
Tavener, Agrophon, Harmonia Mundi – HMU90 7271
‘‘The work places extraordinary intonational and stylistic demands upon the soprano: indeed Patricia Rozario, whose voice the work is specifically written for, spent several months in India studying and perfecting the techniques that Tavener calls for. The effort must have been worthwhile, for Rozario produces a compelling performance of exceptional intensity.‘‘
— – Gramophone
“The high angelic voice of soprano Patricia Rozario has progressed rapidly from being the ideal manifestation for composer John Tavener’s serene vocal music to being one of the most sought-after voices in Britain.’’
— – The GuardianMEIN

Da Capo Sammelan
A Latin- Sanskrit coinage of ‘A Gathering from the Top’
at the Church of St. Francis of Assisi
in the historic precincts of the complex of heritage monuments at Old Goa, Goa
on Saturday, the 5th November, 2016 at 6:15 p.m.
Church of St. Francis of Assisi
Featuring artistes of global renown:
• Patricia Rozario, soprano
• Joan-Enric Lluna, clarinet
• Mark Troop, piano

An hour-long feast of romantic music for soprano, clarinet and piano!
Joan Enric Lluna is Spain’s leading musician, combining his work as a clarinettist with orchestral conducting, recording and teaching. He performs regularly with string quartets of renown, collaborates with first class international artistes and appears at prestigious chamber music festivals around the world. Joan has premiered and commissioned a number of chamber works by the world’s foremost celebrated composers. In 2005 Joan formed Moonwinds, with whom he records. He directs since 2009 the International Festival “Residències de Música de Cambra” in Godella, Valencia (Spain). As a soloist Joan has performed and recorded the clarinet concerto repertoire, and many composers have written new concertos for him. His interest in recovering and promoting Spanish music has produced 5 recordings. Joan made his début as a conductor with several orchestras in Spain and the UK to great acclaim, and has performed as a conductor-soloist, among others, with the Orquestra de Cadaqués, of whom be was a co-founder, and where he remains principal clarinet. Joan teaches clarinet and chamber music at the Escola Superior de Música de Catalunya in Barcelona and Trinity College of Music in London. He is regularly invited to give master classes and recitals in major Music centres around the
Mark Troop, pianist, teacher, broadcaster, festival impresario and writer, is the founder of The Chamber Music Company, a creative performance group. As a solo pianist he recorded for BBC Radio 3 before making programmes as a producer. He now runs five festival events – Rare Classical Music, Inspired By China, Tango Passion, German cabaret and New Classical Music. He also runs Giving Voice to India, an educational foundation in India and is a lecturer in music at Goa University. With singer, Frances Lynch Mark creates and performs interactive children’s drama concerts as part of their group Big Mouth Piano Tales. Mark Troop taught at the Guildhall School of Music for two decades, at Dartington International Summer School for fifteen years and at St Paul’s Boys’ School. As a writer he has been published in Musical Opinion, Piano and Musical Performance.

Giving Voice to India (click here to visit website) is a unique initiative to raise the standard of Western Classical singing, both art song and opera, in India. The project was started by internationally renowned soprano Patricia Rozario and accomplished pianist and vocal coach Mark Troop in August 2009. The project implements a singing course, in line with the format of international music academies, during which Patricia Rozario and Mark Troop work with Indian singers on various skills such as vocal technique, musical style and interpretation, foreign language skills and score reading skills. The duo have taught 29 courses so far, each usually 5 days long and have worked with over 100 students. These courses, conducted in Mumbai, Panaji, Pune, Delhi and Ahmedabad until now, are offered at highly subsidised rates to ensure their accessibility by anyone who is interested. During their time in India, Patricia and Mark have also trained local singers, who demonstrate a sound understanding of the principles, to carry on their teaching work while they are away in order to provide continuous learning opportunities to singers in India.